What is a Shaman Anyway? 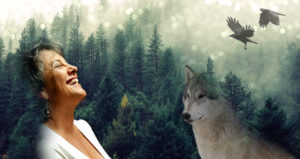 The word shamanism is frequently used as a catch-all term for any form of Earth-based spirituality, but what defines a shaman? And what do these ancient words actually mean? Etymologically, the word “shaman” can be traced back to the Tungus peoples of Siberia and Northern Asia. Those who have studied their languages believe that the modern word “shaman” developed from the Tungusic word “Saman”. And while there are around ten different Siberian dialects, some variation of the word exists in all of them.

With so many different dialects, no single translation has been agreed upon. There are generally three similar definitions agreed upon by anthropologists, each pertaining to the way in which a shaman operates and all of which can help us understand exactly what a “shaman” is.

The first and most broad definition says that shamans are intermediaries or messengers between the human world and the spirit worlds. The second definition limits the term to refer specifically to a healer or practitioner who uses their spiritual and energetic powers to assist others who are suffering. The third, and by far the most complex definition, narrows the term to mean a person who masters spirits, energies, and psychic-like abilities through a multitude of specialized ritual methods. Based upon these definitions, the Siberian term was also applied to describe culturally distinct spiritual practices found within other parts of Asia,  as well as Africa, Australia and even parts of the Americas by early anthropologists, as these practices bear a striking resemblance to one another.

Regardless of culture or country, the role of the shaman is nearly universal. As middle-men between the physical and spiritual, shamans effect change in the physical world by working with the spiritual realm(s). Shamans believe that alleviating trauma affecting the soul/spirit restores the physical being to balance and wholeness. This restoration of balance results in the elimination of suffering.

The exact mythologies and rituals for healing vary from culture to culture, but there are global commonalities. Whether you ask an Evenki saman, a Mexican curandera, a Yaqui nagual, an Inga Taita, a Shipibo Onanya, a First Nations medicine man, a Celtic Bandrui, a Scandanavian Volva, or a modern cross-cultural shaman, we all practice healing as a divine medium between the physical and spiritual worlds; traveling between the lower and upper dimensions to link the physical with the spiritual, communicating with ancestors and helping spirits to obtain guidance, and raising global consciousness to heal the Earth. In a very real way, shamans heal by mending the soul, soul retrieval … be it the soul of the individual or the soul of our world.

More simply than these, however, the Golomt Center for Shamanic Studies (a Mongolian organization of shamans with ties to the originating cultures) more accurately defines the Evenki word shaman simply as “priest”.